More and more colorful festivals are being held annually in Mongolia, in addition to the most important and longstanding 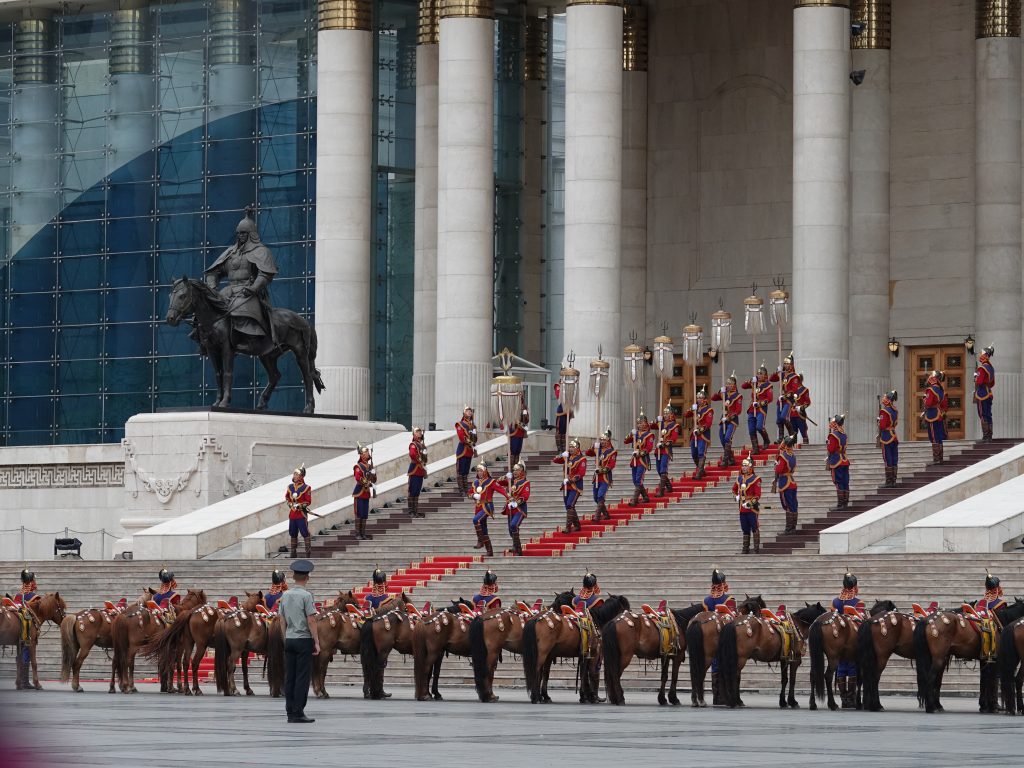 events like Naadam and Tsagaan Sar, to share with local, national and international visitors the rich traditions of the people of Mongolia.  While the most outstanding ones like the National Naadam Festival and Tsagaan Sar, the Lunar new Year Festival, signify Mongolian statehood and the first day of the year according to the Mongolian calendar, respectively, other regional festivals celebrate local culture and art, and most are related to one of the five types of livestock, which are also referred to as the “Five Treasures” (Tavan Erdene) in Mongolia. In rural Mongolia, the livelihoods of about one hundred sixty thousand families still depend on these treasures – horses, camels, cattle/yak, sheep and goats.

The Ice Festival has become a tradition at Lake Khuvsgul, the clear blue ice of which gives the back drop for these winter celebrations. Activities include a display of ice sculptures, rides and races of horse drawn sleighs on the lake, and international skating competition, and ice sumo wrestling. As in any festival colorful traditional costumes will be worn by local participants. Reindeer herders will come to the festival from their high taiga homeland to share their lifestyle and traditions, and local shaman may perform ceremonies to add to the festivities.

There is now a sealed road to Lake Khuvsgul from the capital city of Ulaanbaatar, so the location can be reached in one long day’s drive overland.  By airplane, it’s about an hours flight from Ulaanbaatar city. 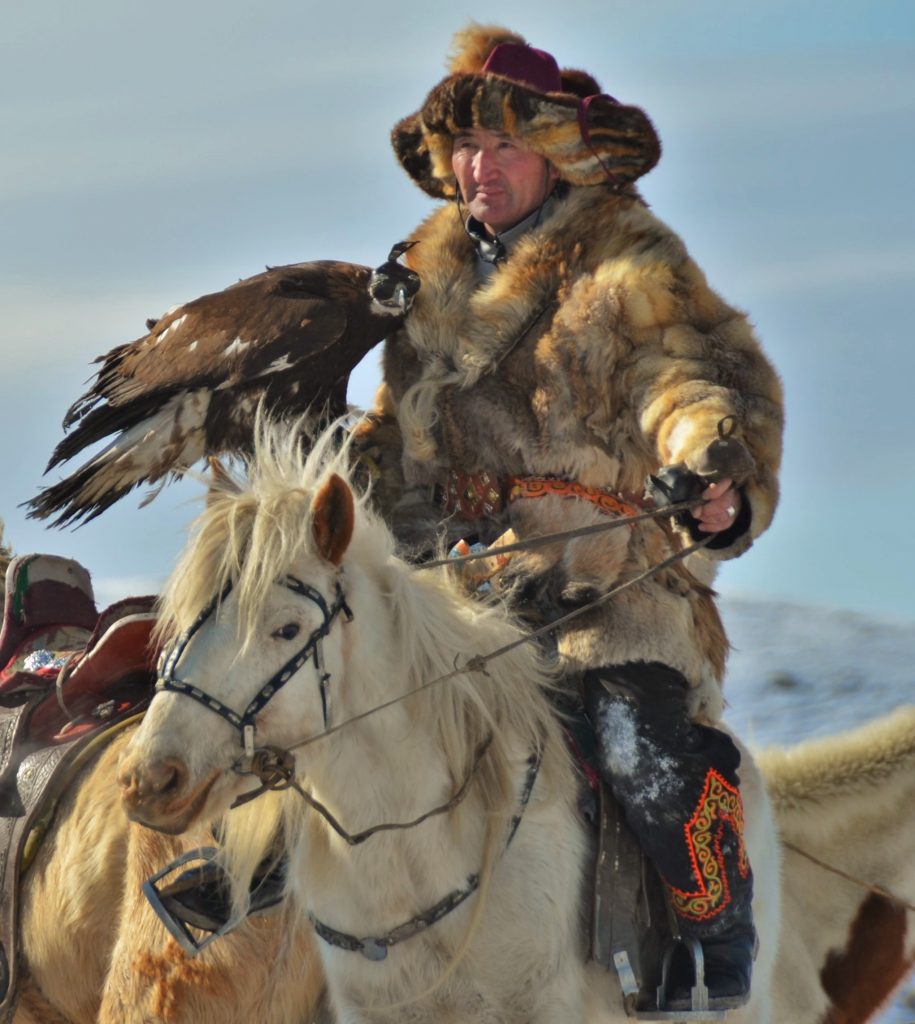 The Golden Eagle Winter Festival near Ulaanbaatar city has taken place for several years, making the show of eagle hunting skills and traditions of Mongolia’s Kazakh people accessible to an even larger audience than can attend the Golden Eagle Festival in October in Western Mongolia.

Kazakh hunters come to this festival, usually clad in fur hats and clothing, with their eagles and show the performances of their trained hunting eagles. There are also other aspects of Kazakh traditions and lifestyle to see – costumes, handicrafts, and foods.

The festival location is outside the capital city, easily accessible on a day tour from Ulaanbaatar.

The camel festival is the event where the nomadic herders of the Gobi showcase their traditions of camel husbandry, skills in 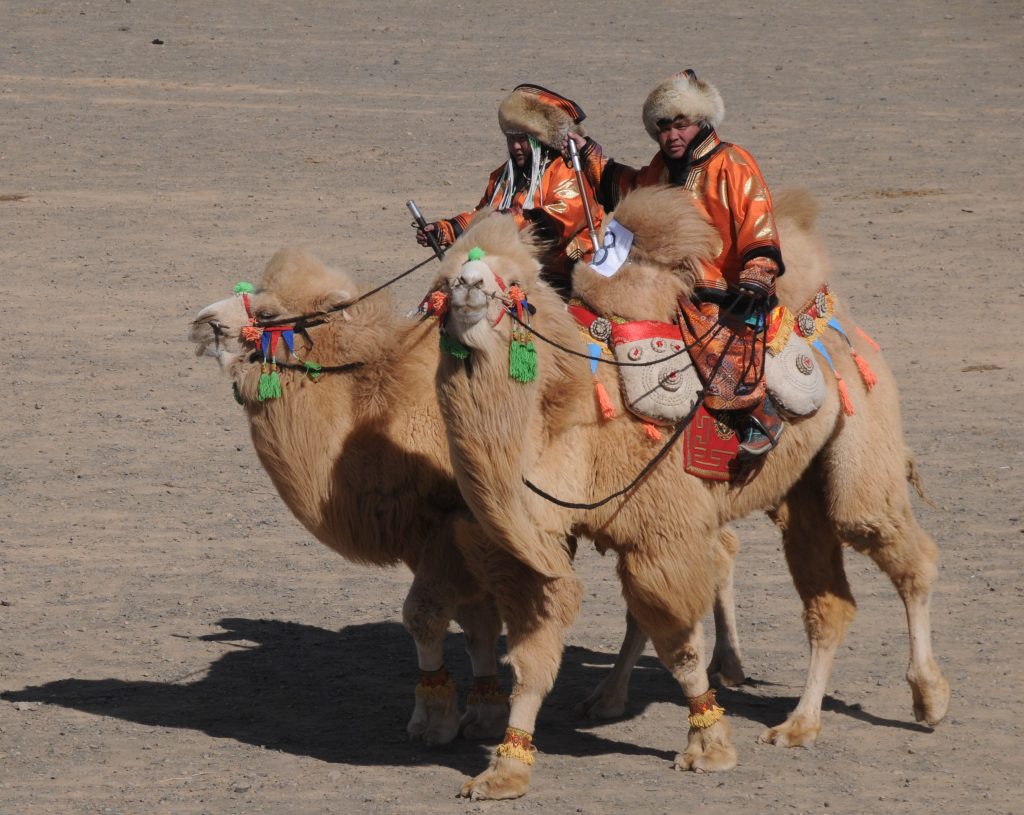 camel training, riding, racing and loading, as well as cultural performances and costumes, camel wool products and foods and drinks from camel dairy.

The Camel Festival takes place outside Dalanzadgad, the capital city of South Gobi Province, or sometimes in one of the near by smaller rural settlements.

It’s a day’s drive by vehicle from Ulaanbaatar, all on sealed road now, to reach the South Gobi, and there are different accommodations available, from modern hotels to home stays with herder families. Learn more..

It is worthwhile to add at least a day tour to one or several of the iconic sites of the Mongolian Gobi, such as the Vulture Gorge (Yoliin Am), or the Flaming Cliffs (Baynzag). 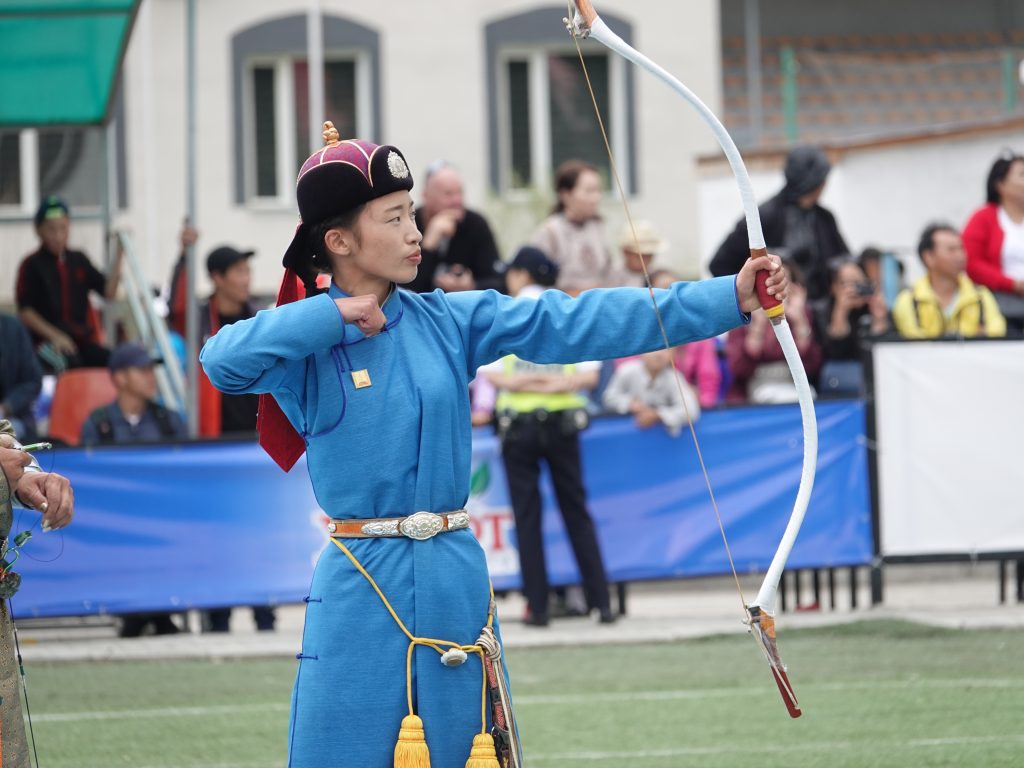 The Mongolian Naadam Festival is a colorful cultural celebration, with fantastic displays of traditional sports. Marking Mongolia’s Independence, it is one of the most important holidays of the country from July 11- 13.

The Naadam Festival is opened in a solemn ceremony, during which riders on light colored horses carry nine white banners (Tsaagan Tug) of horse hair from the Government House to the Naadam stadium. Made of horse hair to symbolize the central role of the horse in Mongolian life, the banners were an emblem of peacetime since the Khans and have been adopted again after the end of socialism.

The National Naadam Festival takes places in and near Ulaanbaatar, the capital city of Mongolia. The three days of Naadam are marked by competitions in horse racing, wrestling and archery, celebrations and fairs. The celebrations are also named “eriyn gurvan nadaam” in Mongolian language, or the “three manly games”. However, only wrestling is men-only. Archery competitions are held separately for men and women. And in the horse races, young children are the jockeys.

Naadam is a colorful festival filled with sports and cultural events and ending in great celebrations. It is an important state holiday, commemorating the 1921 struggle for and declaration of Mongolian independence. In 2010, Naadam was inscribed on the Representative List of the Intangible Cultural Heritage of Humanity of UNESCO. Learn more..

A celebration of yak and their importance for herders life in the more mountainous areas of Mongolia.

In recent years, as value chains of local raw products are being developed, yak products (dairy and wool) have also drawn more attention.

During the festival locals show off yak riding and rodeo, yak milking and dairy products, products from yak wool, games of polo with yak, yak racing, and as in other festivals, show their best traditional costumes.

The bigger Golden Eagle Festival in the Westernmost province Bayn Uulgi, where the ethnic Kazakh population of Mongolia is concentrated, takes place in early October. After the Naadam Festival, it may be the best know and most visited festival by international visitors. It offers all the displays and competitions of Kazakh eagle hunting skills and traditions, in the stunning surroundings of the Altai Mountains of Western Mongolia.

In recent years, it has become even better know through the award winning feature/documentary film “The Eagle Huntress” about a young woman eagle huntress preparing for an winning the competition.

The horse festival is relatively young, but is gaining fast in popularity and in quality of organization. It is held in the country side in the North East of Mongolia, in Batnorov Soum of Khentii Province. The location is a long day’s drive from Ulaanbaatar, and about two hours drive from Chinggis City (formerly Undurkhan), the center of Khentii Province. The region is rich in heritage related to Chinggis Khan’s ascent, unification of Mongol tribes and organization for warfare. The area is also a traditional center for crafts in Mongolian saddles and tack and for horsemen skills.

The festival features exciting competitions, of riders catching horses, picking up items from the round while galloping, riding untamed horses, as well as a show of beautiful traditional costumes and cultural performances.

When making the trip to the festival, it is worth to visit some historic sites, such as that of Ikh Aurug (palace) of Chinggis Khaan on the banks of the Avraga river. Also enroute to and from Ulaanbaatar is Tsonjin Boldog complex, with a giant statue of Chinggis Khan and a museum. 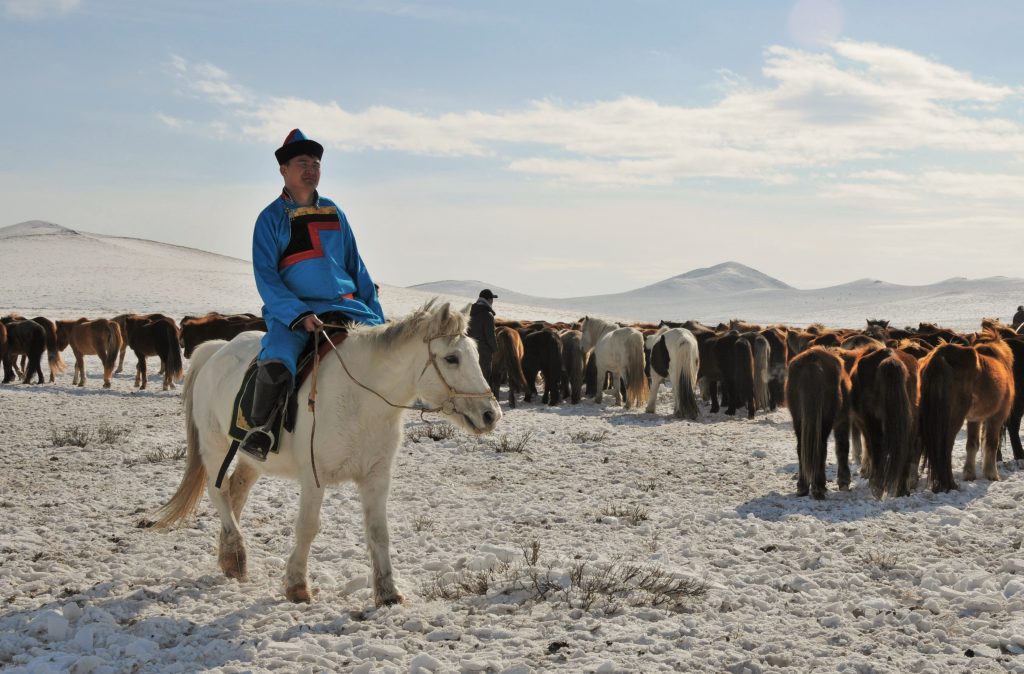 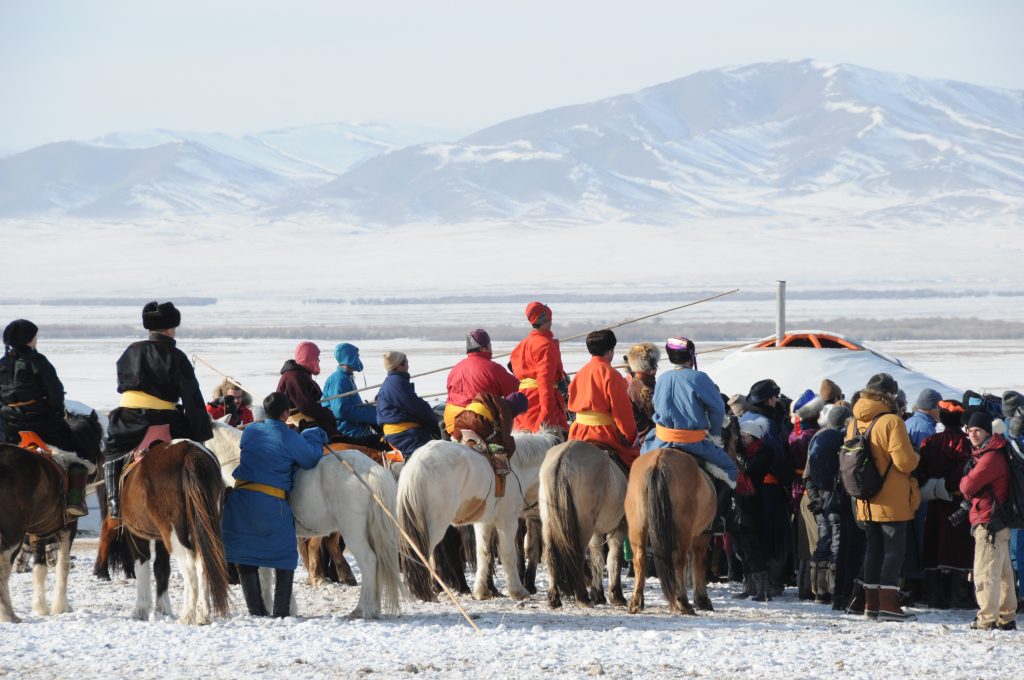 Festivals in Mongolia – and Festivals Worldwide!

To read more about the above Festivals in Mongolia, and about festivals all over the world, check out the long list of Events and Festivals at Travel Begins at 40 !

Combine Your Festival Visit with an Adventure Horseback Ride or Gobi Desert Tour in Mongolia !

Several of our tours are scheduled to make it easy to add on a festival.