The Anniversary of the Birth of Chinggis Khaan

The Anniversary of the Birth of Chinggis Khaan

The Anniversary of the Birth of Chinggis Khaan – Celebrations in Mongolia

The anniversary of the birth of Chinggis Khaan is celebrated in Mongolia on November 12. The day is a holiday for those working in public service. The anniversary of birth of the founder of the Mongolian Empire is marked with a series of ceremonies on Chinggis Square, the large public square in front of the Government House. A statue of Chinggis Khaan sits atop the staircase leading to the entrance of the Government House, he is flanked by two of his best soldiers on horseback, whose statues sit atop pedestals on each side of the stairs.

On November 12, soldiers on horseback perform a ceremony that marks the most important state holidays in Mongolia, such as Naadam and the anniversary of the birth of Chinggis Khaan. The nine white banners (Tsaagan Tug) of horse hair are delivered from the Government House to the square. Made of horse hair to symbolize the central role of the horse in Mongolian life, the banners were an emblem of peacetime since the Khans and have been adopted again after the end of socialism.

The ceremony is a solemn ritual, but colorful against the back drop of the city in winter. The riders holding the nine banners are on light colored horses, and a larger contingent of riders follows on mostly chestnut brown horses. Enjoy the images below from November 12, 2015 – the 853rd anniversary of the birth of Chinggis Khaan.

“Vastly more progressive than his European or Asian Counterparts”

For an interesting read in English language about Chinggis Khaan (spelled Genghis Khan in many Western countries), consider Jack Weatherford’s “Genghis Khan and the Making of the Modern World.  The author provides interesting insights, – ” In nearly every country the Mongols conquered, they brought an unprecedented rise in cultural communication, expanded trade, and a blossoming of civilization. Vastly more progressive than his European or Asian counterparts, Genghis Khan abolished torture, granted universal religious freedom, and smashed feudal systems of aristocratic privilege.” 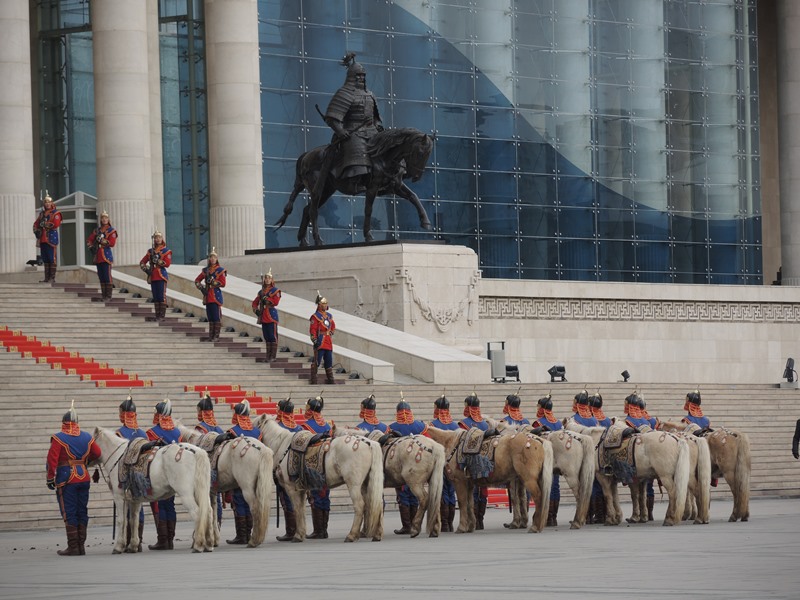 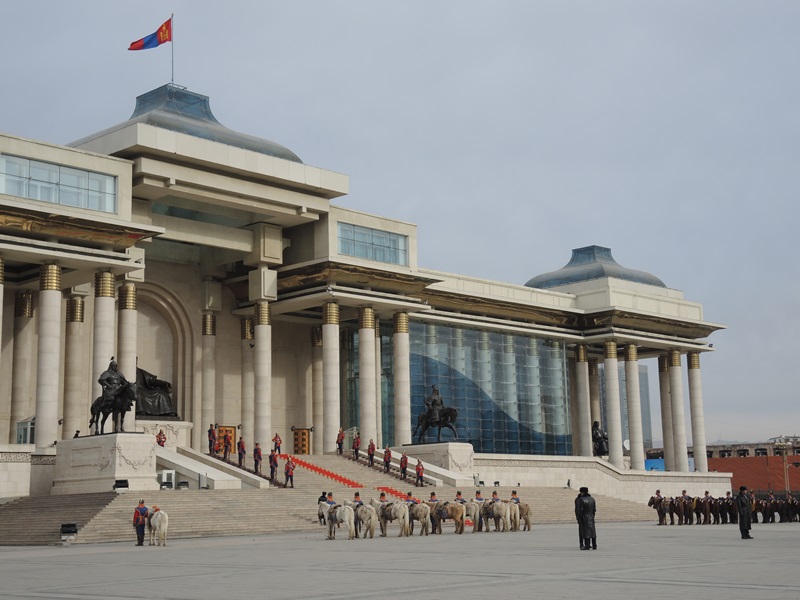 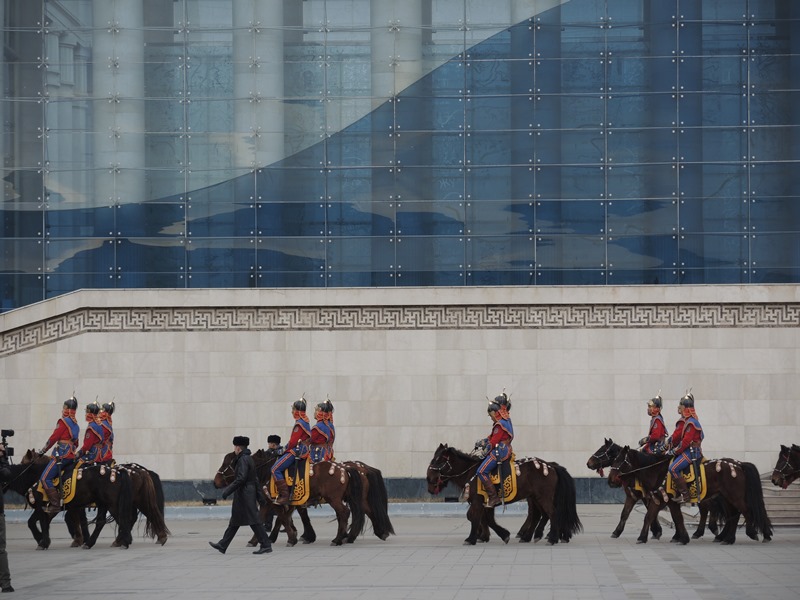 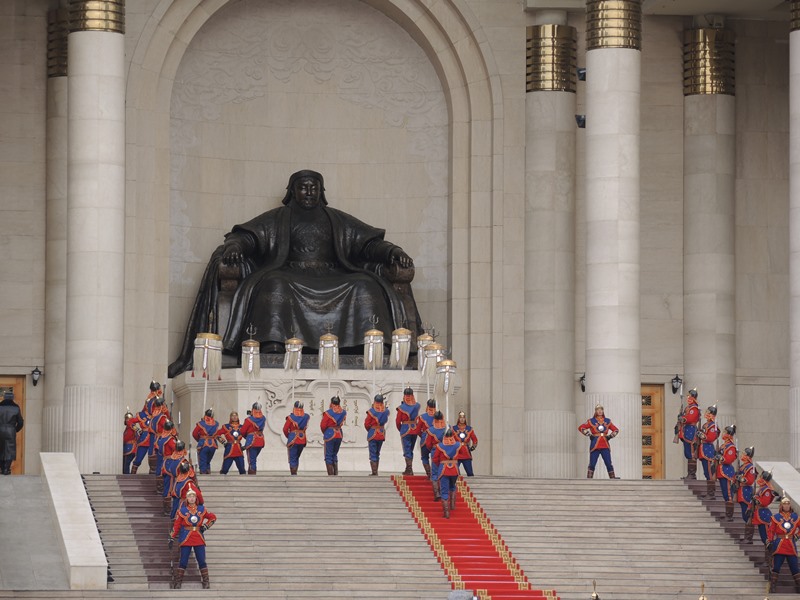 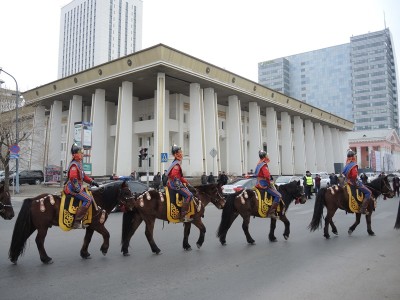 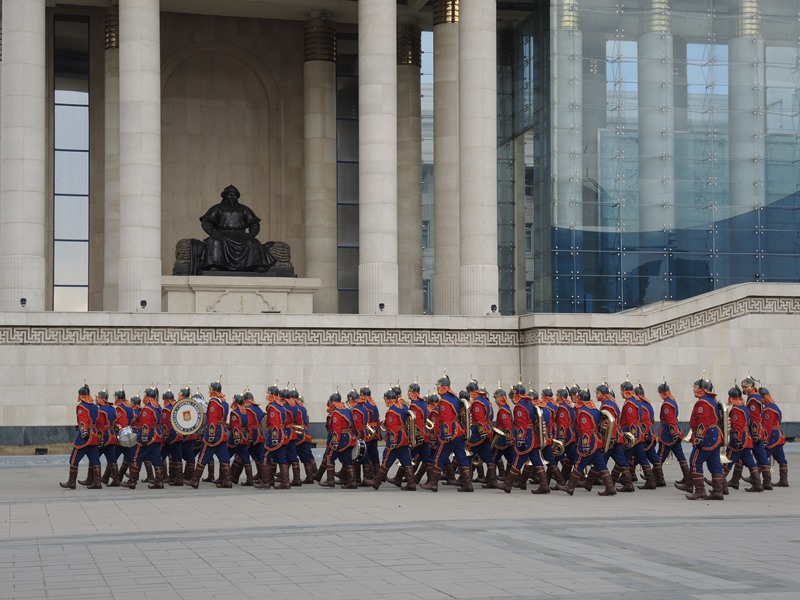