Another Season of Riding Adventures in Mongolia

As another season of riding adventures is completed, I reflect on the places we explored on horseback. There is a look-out point about a 2 hours ride from the Stone Horse cabins where we like to take guests on day rides.  It’s a mountain top where old pine trees have fallen and opened the view. Their trunks of gnarly, grey wood rest on a scree slope with lichen covered boulders.  From here, one can have a peek preview into the Khentii wilderness – down into an untouched valley where elder bushes cover the lowland and hide the creek of clear water, – over forest clad mountain ranges , and to the barren tops of the high mountain ridges far away. I even think that you can hear the Khentii from here – because all you hear is silence and the wind in the pine trees.

End of Season in the Khentii Mountains

When I was there last, in mid October, I saw the snow settled on the distant mountain tops and the colors of autumn fading, starting to give way to a colder grey. The air was getting sharp with cold, and the wind gusts were sending a real chill as the afternoon  sun was getting low. I knew the season of long rides with warm sunshine, of vivid summer and then golden autumn colors was over for this year. 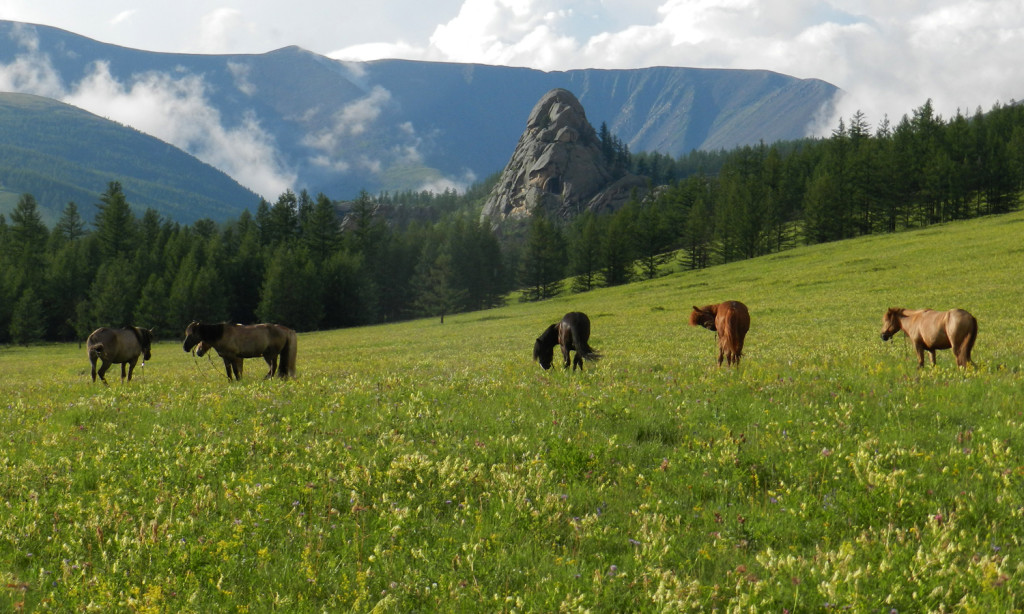 It was a another season  of riding adventures completed successfully. Everybody returned healthy and happy, with fond memories and great travel experiences. Our guests learned something about the people and culture in this part of the world   and the Stone Horse team, saddle and pack horses, and the dogs enjoyed the time  in the wilderness. The pre-season had been very busy with checking and up-grading camping gear, saddles and tack, sourcing foods, and getting the team ready. The team members on 4 legs had their checks for tooth and hoof condition and some had their teeth floated and their hoofs shaped up. Most need none of it.  All they needed after a long winter of pawing in the snow and going home at night for oats and bran was a saddle on their back and getting their minds back on the job. Which they seem to enjoy. The pre-season rides get them up in the mountains and over the pass into the park, to nice pastures with fresh grass and spring flowers.  More variety than in the home valley from where the herd doesn’t venture far, ever mindful of the wolves.

The team members on 2 legs were newly outfitted as well with 3 season clothing, including the traditional Mongolian jackets (Hurem) made by Nara, our talented assistant who rides horses as well as she plays piano and designs and sews clothes and gives a hand with cooking. A refresher FirstAid course for our Mongolian team members had also been part of pre-season activities. 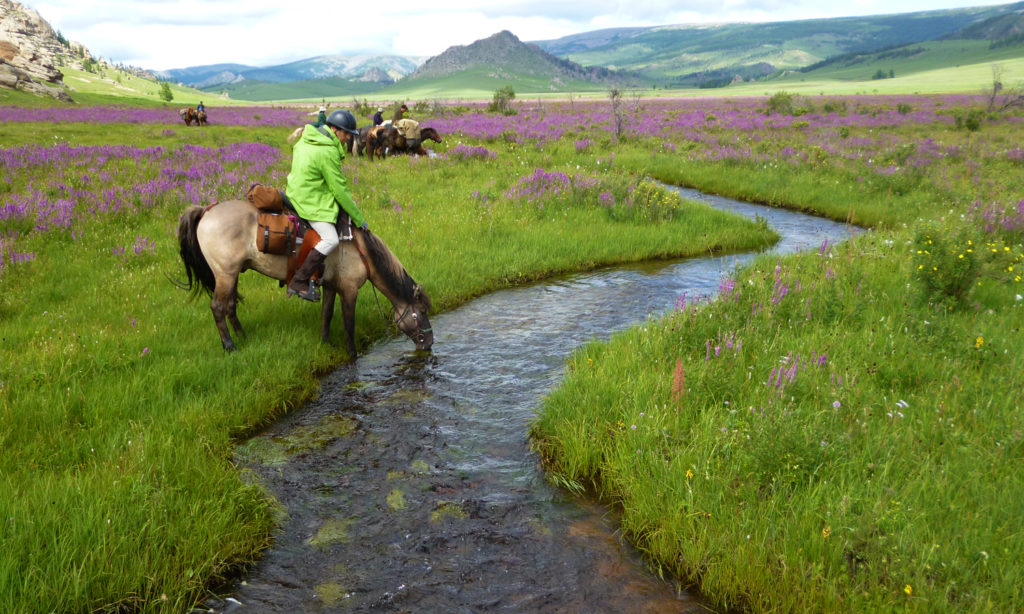 The year brought a wealth of colors, – wildflowers as we have never seen them in 15 years in Mongolia. Of course there was a downside to it – the early summer was unusually wet and rather cool. For the pastures of Mongolia, for the water sources that have been dwindling under a climate change, this was a much needed relief that replenished aquifers. We saw springs alive and creeks running where we had not been able to camp for lack of water in recent years. Mountain meadows exploded in pallets of purple, blue, red and yellow. There seems to be a sequence of colors and on every trip the passes and valleys were in new vivid shades.  Needless to say the horses enjoyed the buffet of grasses, herbs and flowers at every stop. We took long lunch breaks, stopping in meadows of flowers near streams,  or riding  up high to towering granite rock formations to enjoy the sweeping views across the landscapes of the forest steppe.

The welcome rainfalls were a good reminder by mother nature; reminding us that the schedule of  wilderness trips is ultimately determined by nature. Our back country trips include a lot of river crossings, and safety is first. On one trip this past season, we had to just wait. Making camp and watch the river and make a very early morning crossing at the one place where  the river allows it even at high water; where the water slows and spreads out, letting us cross safely, with the smaller horses in water up to their bellies. They all do so well, whether saddle or pack horses, they make these crossings sure- footed and willingly. In fact, they seem unfazed, casually taking a few sips to drink while crossing a pretty fast flowing river.  The young puppy, – one of three dogs on that trip-, took a while to make up her mind where to dare the crossing; seeing us all on the other side, she finally gathered her courage and entered the river, being carried way down before scrambling up the bank, happy to be united with the rest of the team of horses and people and other canine friends. 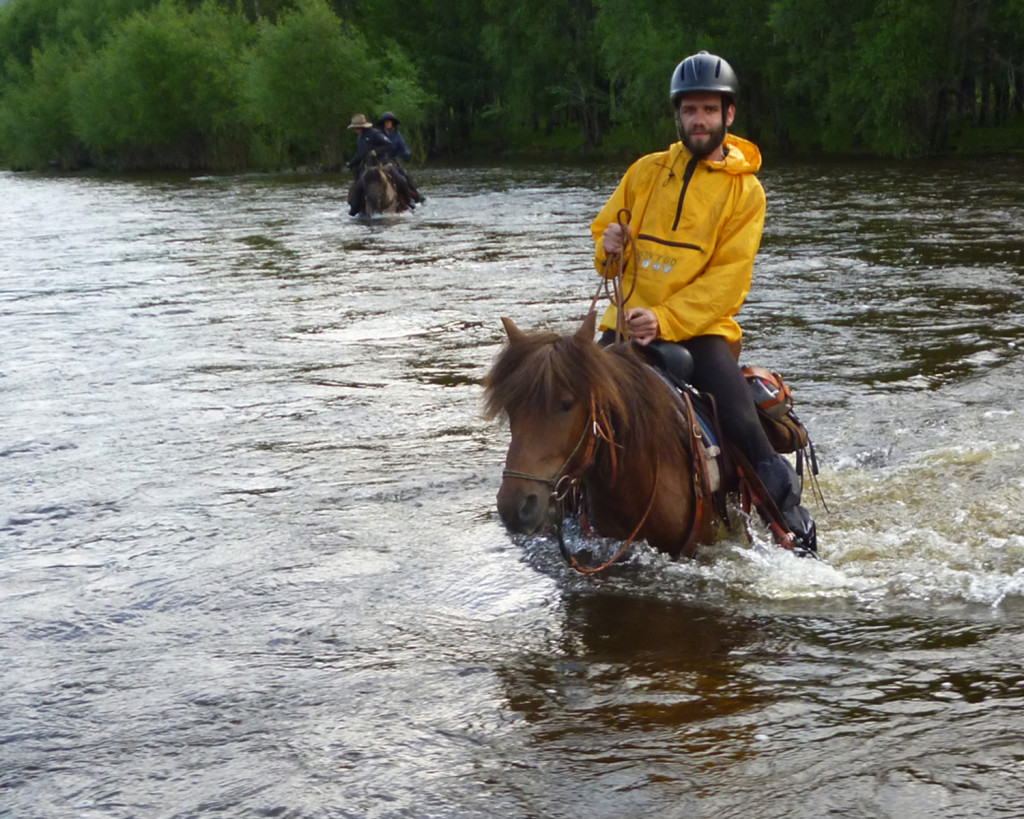 Keeping Wilderness in my Mind

While I still see and smell the wild flowers in my memory, it’s the image of the wild river in flood that really is vivid in my mind, an image I like to revisit – to keep feeling the wilderness in the off season. We had made camp to wait for the river to drop, and in the later afternoon, Keith, Byamba and myself  set out on horseback to explore downriver. To check a steep hillside passage high above the river that we have known for years as a possible route, and perhaps test some sites for crossing. The rains had stopped, the sky was still grey but there was a glaring sunlight breaking through the grey. In that afternoon light, the river was glistening as it was rushing past, its color like mercury in the bright sunlight. All colors were saturated by the light and the water everywhere. The grasslands and forest were in vivid greens and the grass underwater, where the river had flooded over its banks was the brightest green, seen through glassy clear water.

Our horses carried us right into the river, across an outer arm, and then we met and stood on a pebble strewn island surrounded by the wild river, looking out onto the main flow. This was not water flowing in a river bed, not a flat body of water with little waves dancing and breaking on the surface. This was a mass of water so swollen that it rose in the center as it pushed past; it was an image of uncompromising wild power and beauty. There was no way to even enter it, even on a strong horse.  We knew that waiting was the right and only thing to do. And very early in the morning the next day, when the level had dropped a bit, we crossed further down where the river let us.

The later season brought beautiful weather and autumn colors, with warm sun in the day time and crisp and clear nights.  Our large dinner tent with a wood stove was put to good use; I am still amazed how fast it heats up. In the early morning, when I zip open the cold tent, having shaken off the hoarfrost or snow from the walls, and start the fire, it takes 5 minutes and I can enjoy my morning coffee in a cozy tent before starting breakfast preparations for our guests.  One early October morning started with snow on the ground and on all the tents; the sun soon burnt off the snow and by the time we were in the saddle, the sun was up and the land in bright autumn colors again.

That day was overshadowed a bit though. The older dog “Khenbee” (Mongolian for “Who is it”?, and we don’t know how he got his name…), who had been on many trips with us, and had come again this time, along with the two young dogs, had not arrived in camp the previous night. We had enquired with the herder at the last camp we passed and he had seen the dog heading back – homewards. We were worried; we had been riding for three days, made three river crossings and had come over three passes. There were wolves, there were many dogs along the way, and it had snowed in the night. And “Khenbay” is not the youngest anymore. He is a veteran of many adventures though and he usually negotiates his way past other dogs rather than getting into fights, nowadays. We started heading home from that campsite.  A two day ride was still ahead and all the way we wondered where he could be, if he was alright.. But when we arrived back in the Darkhid Valley, he was there of course, and he had made it back in one day! 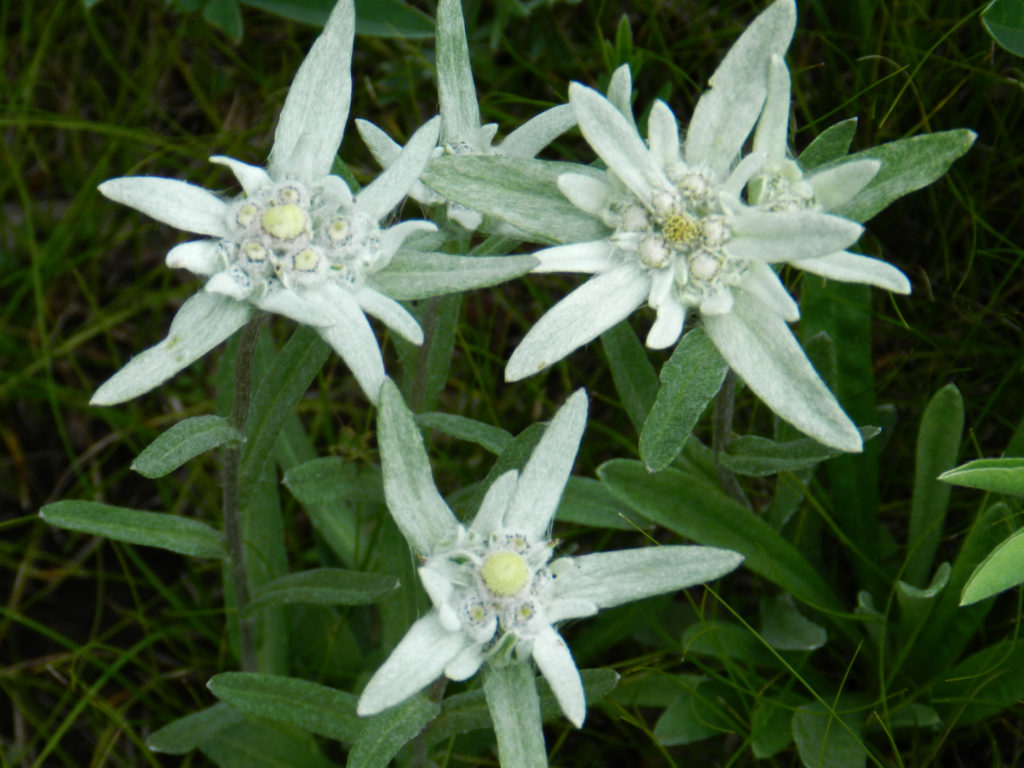 Another great memory of the year is that of the rides home with many of our horses running along free. A few times, our guests ended the trip at the village of Terelj rather than at our staging area in the Darkhid; due to their flight and work schedules, they would need to make it to the airport sooner. So their horses were rider less after they left and since one of our vehicles was there  we also sent back  pack saddles and panniers  to free the pack horses of their loads.  And then we would just all head home, an easy day’s ride with the horses running free. These were great rides, ending another season of riding adventures – driving the herd along. Well, there was not much driving needed. The horses seemed to enjoy it just like us, all of us moving together, knowing that work for that trip was done, making our way over three passes towards home and a few days off before the next trip…

Thanks to all Our Guests and Our Team

We had a great season, thanks to great people who joined our trips and whose company we really enjoyed, thanks to a good team of young horsemen, logistics and all-round assistants on trips and in the office, and thanks to our horses who became a new herd this summer.  Spending so much time together in the back country, they sorted out their differences and the new ones found their place in the herd.

Learn what our Guests have to say about their experience horse trekking with Stone Horse Expeditions, and see images of the wildflower season in the parks we ride in.

Planning another Season of Riding Adventures

Now, as the herd spends the short winter days out in the valley, heading home early for hay and grain, we plan the next season with some new routes, some explorations perhaps for the most adventuresome. And, we would like to start sharing the great Gobi experience as well.  Watch our website for more. The new schedule is posted already. So are videos of guests talking about last season’s trips and a nice video of a river crossing, of horses and riders and dogs…