Horses, the Dawn of Art and Forgotten Dreams

Horses, the Dawn of Art and Forgotten Dreams 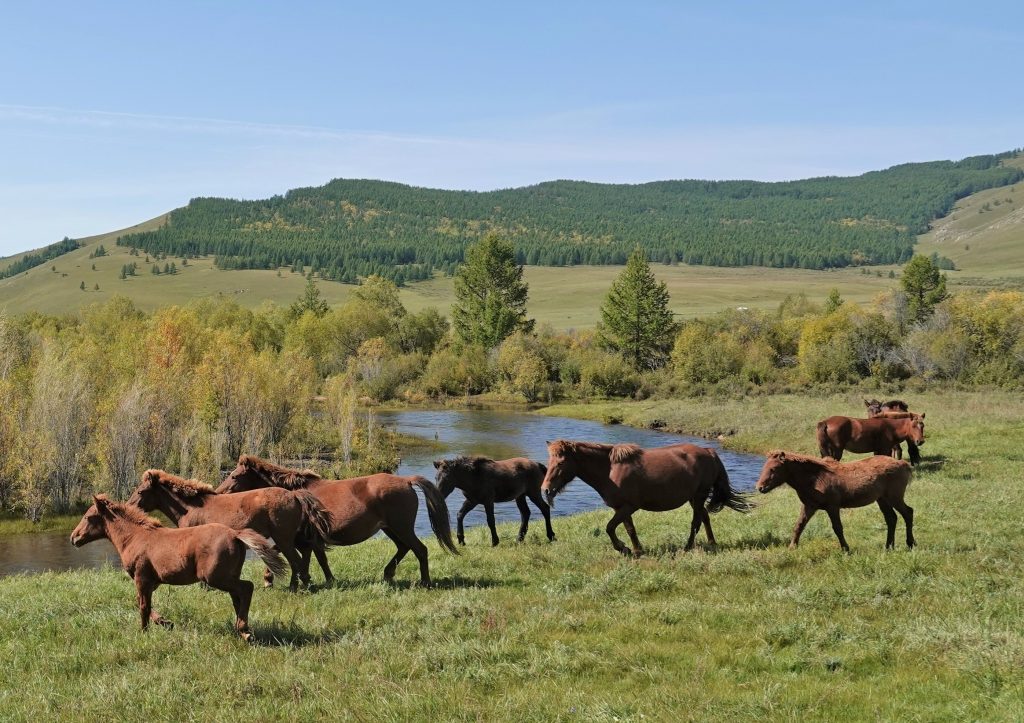 When you walk the streets of Mongolia’s capital city Ulaanbaatar in the summer season, you’re sure to come across a few art students offering drawings or water colors for sale. And it is also quite certain that a good portion of the artwork will depict – horses. In a country where horses are still a common means of transport in the countryside, where a horse alone – with or without a rider – wins a horse race, and a large herd of horses is a symbol of wealth, this is no surprise. The horse plays an important role in life and art in Mongolia . Artists are well-known for their horse studies, and an artists’ association named itself the  “Green Horse Society”, stating in their 1990 manifesto that “art must be about free thinking” and that “art is happiness, sadness and regret, and even belief in magic.”

The Dawn of Art – Images of Horses

From the beginnings of artistic expression, horses seemed to have played an important role in human imagination and in depicting the world.  The oldest paintings known to date are those in the Chauvet cave in Southern France, found again only in 1994 – 34,000 years after people had begun painting on the walls of the cave  the animals with whom they shared the ice age landscape. The paintings show studies of lions, bison, woolly rhinoceros and – horses.  A “panel of horses” depicts the portraits of four horses. The portraits and the perspective in which they are seen, speak of the skill, insights and mindfulness of the artists, and bear witness to their knowledge and understanding of the horse as it comes only through a lifetime of observation, interaction, and respect.

The horse also inspired early sculptures.  I remember first seeing the beautiful, simple lines of the small horse figurine that was found in the “Vogelherd” cave in Swabia in Southwest Germany, an archaeological site that has produced numerous significant finds.  I was fortunate to witness a replica being made in the lab of the institute of earth sciences where I was a student.  The beauty and simplicity of the sculpture, the grace of the horse, has stayed in my mind all this time. This sculpture is dated as about 33,000 years old, and is carved from mammoth ivory.

In another ancient art site in Southern France, the famous Lascaux cave, horses are the most common animal painted. Of 605 identified animals, 394 are horses! A famous image from there is that of a dun-colored horse, very much like the Takhi, or better known as the Przewalski horse, the wild horse of Mongolia .

Horses bring us back to Forgotten Dreams 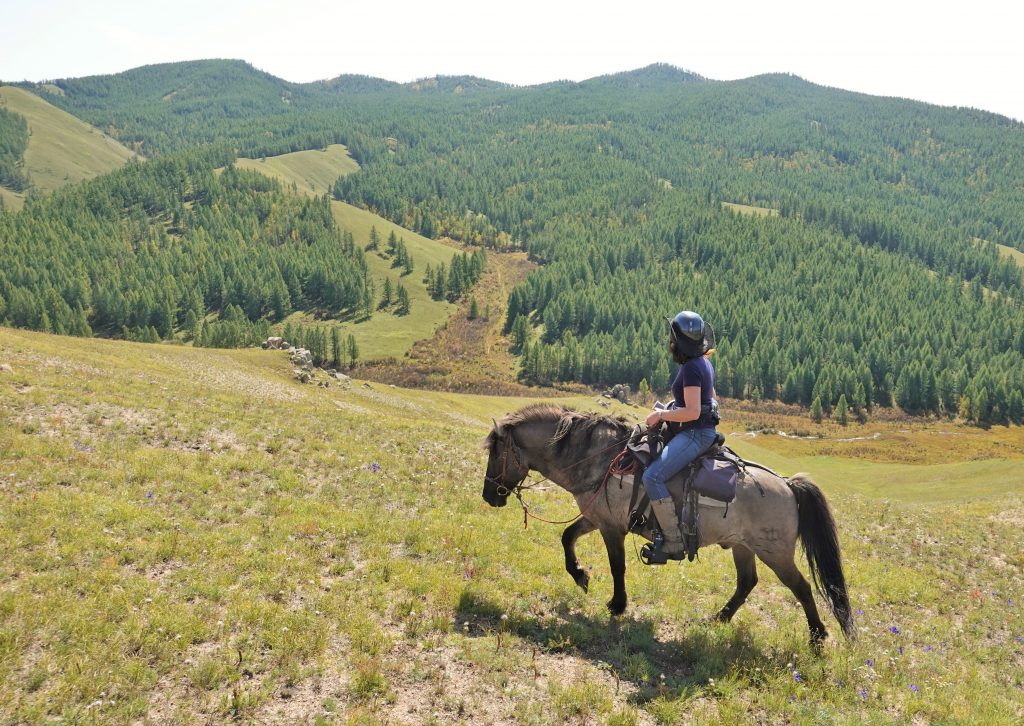 The images of the Chauvet cave are shared in books like “Dawn of Art,” and brought to a large audience by director Werner Herzog in his film “The Cave of Forgotten Dreams”.

But what is so striking to me is that the horses in these images look so familiar– the profile of their heads, their sturdy build and the grace and strength that transpires .  In the “Cave of Forgotten Dreams” I see the very horses who carry us today on Stone Horse Expeditions and who I never tire of watching and depicting in images. Photographic images that is – as I lack the skill of those artists 34,000 years ago.

Being with Horses in Mongolia 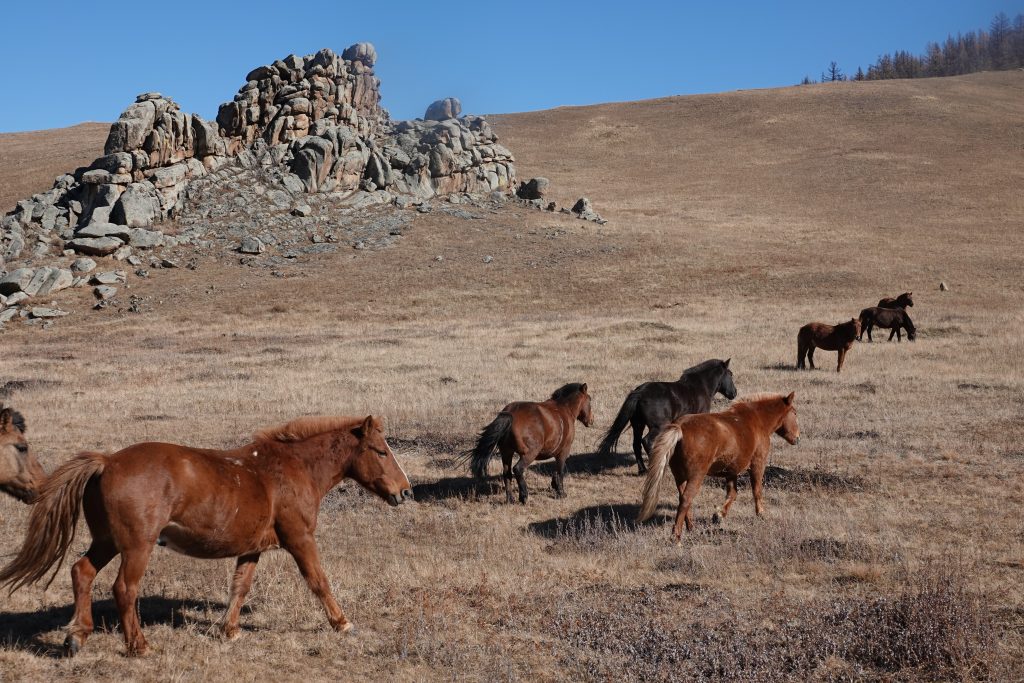 Being with horses as we are at Stone Horse, the cave images touch me. And they seem to confirm what –  in my own interpretation –  is a big part of what draws us to horses.  They are still the same, their connection and pure wisdom goes way back. They live what for us are forgotten dreams, and I’d feel lost if I couldn’t be with them.  There is something deeply  natural and satisfying in being and traveling with horses.

On our trips, sometimes one of the local dogs decides to come along. First, it seemed like a nice gesture that he’s seeing us off; 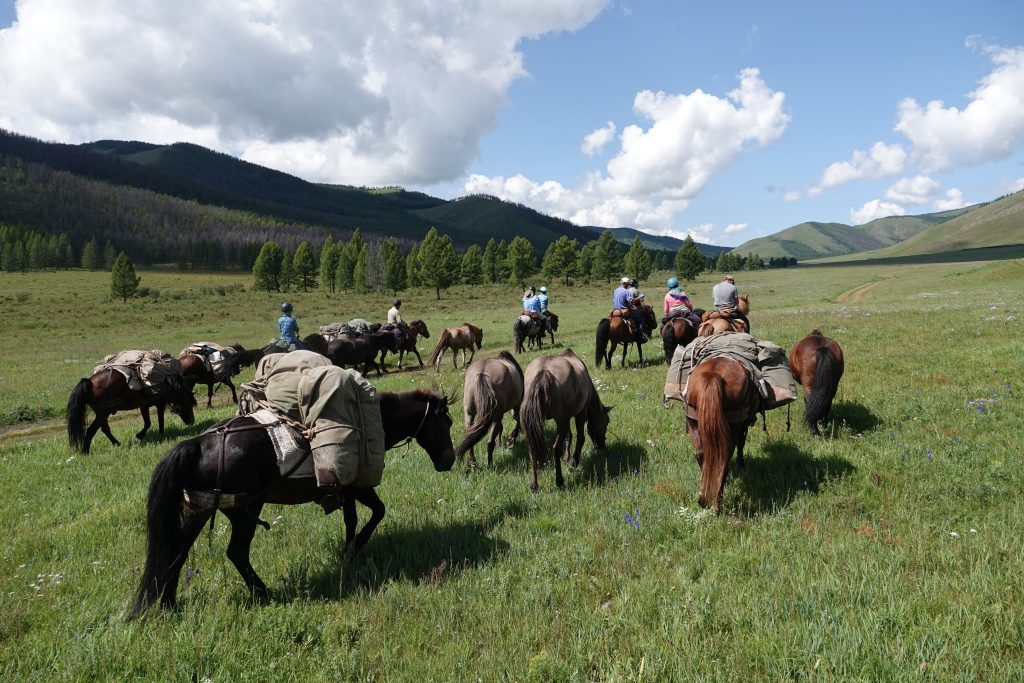 it then turned to surprise when he swam across the first river with us, where we thought he’d return home. And some days into the journey it turned out to be more, and added a lot to the travel experience.  I remember Keith saying : “Three species traveling together,” as  our group – horses, humans, and a dog – was trotting along. At night, the dog curls up close to a tent, the horses graze close by, – and in the distance we hear wolves howling, the cousins of the dog who never came to the campfire.  On trips like that, days are as much for dreaming as the nights are.

See the ancient images of horses in the “Cave of Forgotten Dreams”.or  in the book  “Dawn of Art: The Chauvet Cave (The Oldest Known Paintings in the World)”, by Jean-Marie Chauvet, Eliette Brunel Deschamps and Christian Hillaire.

And  – needless to say – the famous cave of Lasceaux was discovered by four teenagers who followed their dog down a hole….. Amazing things happen when you saunter in the wild, in the company of humans and other species..

Getting back to forgotten dreams may be just what you need. Traveling in the wild, with horses, dogs and humans will help you do just that.. 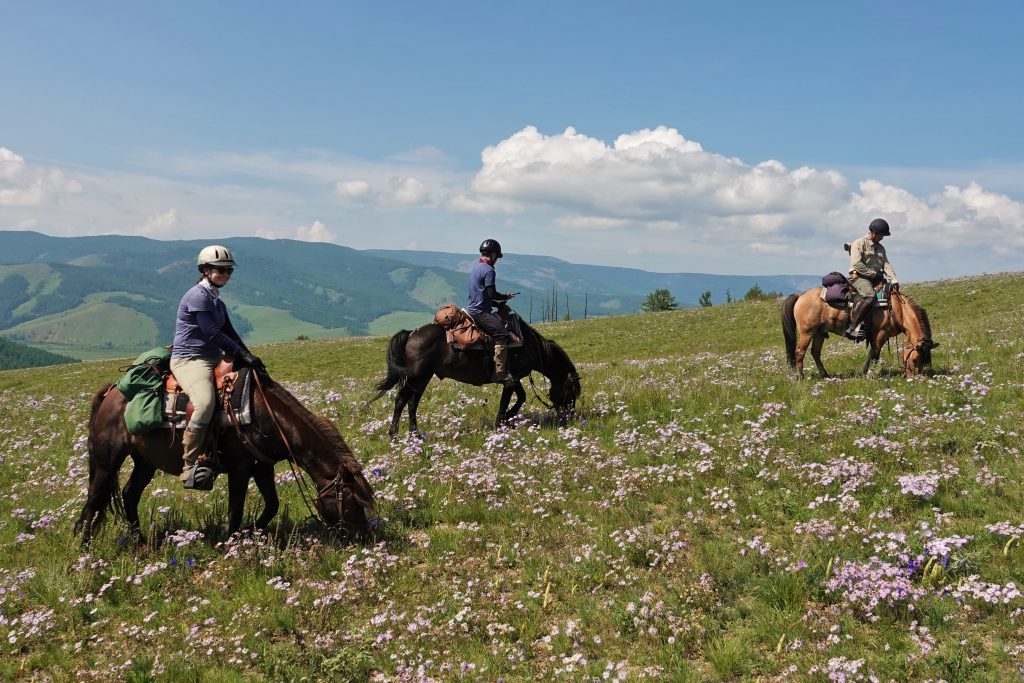 Learn more about our horseback expeditions in Mongolia: 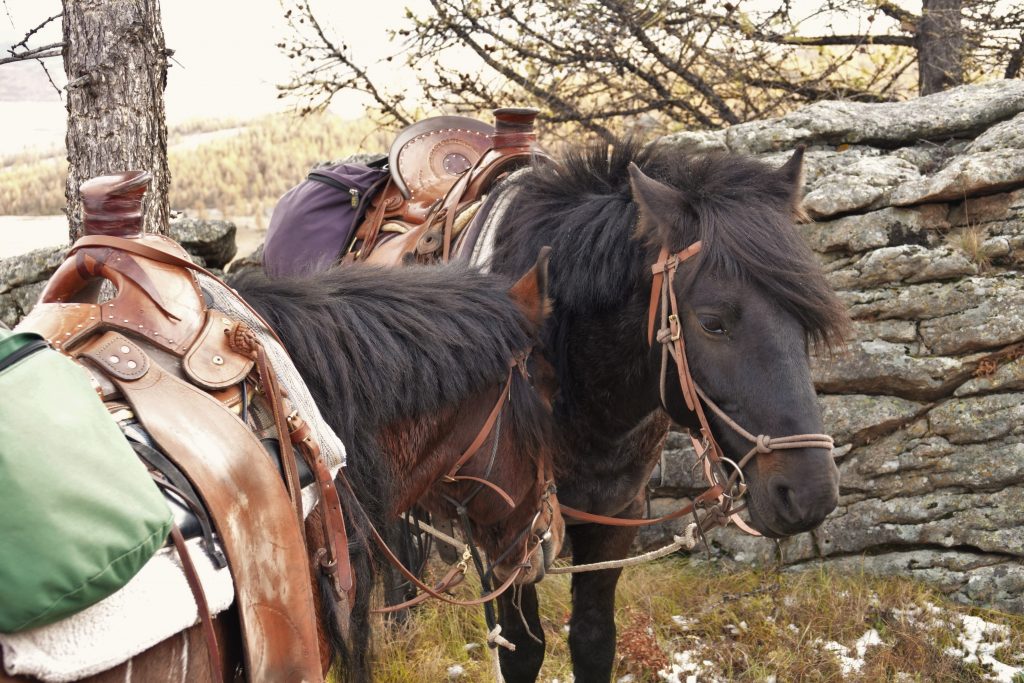